Sunday was the best day of the year so far. The morning frost soon burned off and with a hot coffee we headed out on to Dingle Bay. As we travelled west we tried a little area of rough ground where we caught Cod a few days before. We set up and with almost no wind we drifted slowly over the mark. Lo and behold in a short time we had 2 fine Cod caught by Martin from Germany. This was his first time fishing the Atlantic, his girlfriend was also an experienced fisher. The North Sea is where they fished on a regular basis.

Pollock were plentiful but not large, 2 & 3 on the trace was a regular event.
We moved further west and came across Mackarel. In short bursts we were hauling one on every feather, up to 6 per haul. A few Pouting were caught and a Ling by Coleman and more Pollack. At this stage we had a box full 40kgs when Davey started filletting. 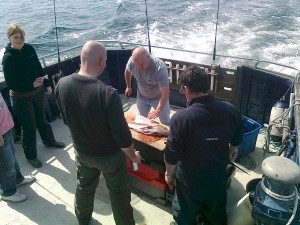 While we watched Davey there was a shout of Whale !, we all scanned the horizon to the south, yes, the whale appeared again, we waited for another sighting a Minkie Whale was feeding along with Gannets and Gulls 200 metres away from us. There was great excitement but it dissapeared again so we continued fishing. As we were about to steam home again we saw the whale surfacing we moved in to get a closer view but after one more appearance it dissapeared. On the way home we stopped at the original spot and Mackarel and a few mid size Pollack was the result here. All had slight sunburn and big smiles after the day out. 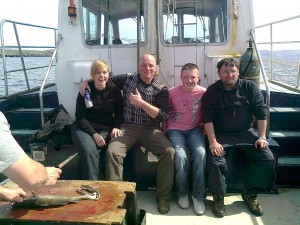 The forecast for the early part of this week is bad so we will have to wait for the next outing at the weekend.
Rory.

I'm a captain with over 40 year experience, I operate a charter boat from Dingle Ireland.
View all posts by rory →
This entry was posted in Fishing. Bookmark the permalink.