We set out from Dingle at 10am last Sunday the 6th March.
On our way out we were escorted by Fungi, the Dingle Dolphin. Heading west, I tried out my new fish finder a Furuno FCV Digital. Just west of Ventry we came across a large mark of fish. It was all action with the guys and they were hooking Coley in 2’s 3’s and Peter hooked 5 on one Jig. We then heades west again to a mark I know here we hooked the 1st of the large Pollack. We were joined by seals, so it was time to steam off at speed to the next mark SW of Slea Hd. Here again we hooked and landed more Pollack and a few Cod. Again more seals fishing went dead so we moved west again South of the Foze. More good Pollack and Wrase here and even some Herring !
We bagged about 150KGs for the day. The guys were delighted as most were avaid ‘fish eaters’.
The forecast for next week from 11th March onwards is not great with SW winds 5 to 7 so next fishing trip will be the weekend after St. Paddy’s Day. 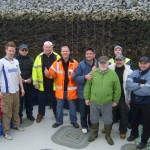 1st Fishermen of the Year.

Fungi checking us out ! 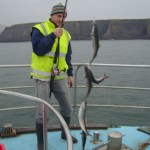 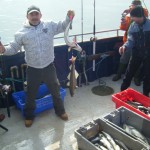 Why catch one Pollack ?