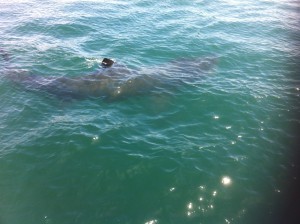 A peaceful Basking Shark in the Blasket Sound May 14 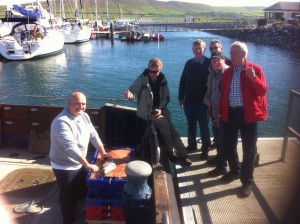 On one of the best days we have had this year we headed out with Michael and his friends from Germany. The wind slight from the SW about F 2/3, blue skies, we were going fishing. 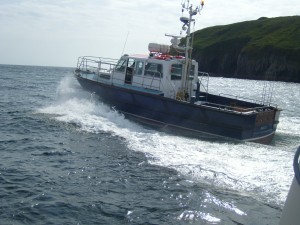 Where is everybody, asleep ????

As we passed Parkmore Head we came across a pod of Common Dolphins too numerous to count. As usual they were very playful and rode the bow wave as we travelled west but we made a 360 turn to keep them with us. The guys were amazed how playful these were. 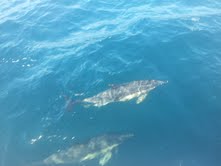 We travelled on to Slea Head the guys were amazed at the history of the are indeed the pre-history, bee hive huts, stone circles all at the Fahan and of course Dun Beag fort. The fort itself took a battering in the January storms. Pollack were soon coming up in 2’s and 3’s most mid size 2 kgs and even a few nice Mackerel. In the distance we saw a Minkie Whale blowing and showing us his back so we hauled up and off to the west to explore. Again more Common Dolphins surrounded us, again we made slow turns and stood out on the pulpit rail looking down at them, ‘what a sight’ the lads said.

We broke for a late lunch after all the morning excitement, it was like a picnic setting up a table from fish boxed on deck. I cooked the Mackerel in fillets , the freshest ever and made coffee we all sat down and drifted near Coomeenole beach as we lunched.

I’m glad to report that the fishing is back again after the terrible storms of winter and delighted that Pollack, Cod and Mackerel are plentiful.

We headed back to Dingle in the evening and we met Davey at the pier who filleted our catch of Pollack, Cod & Mackerel. the boys took them to the Marina Bar where the chef cooked them for Michael & co. We call this ‘Catch & Cook’ and is available all Summer.

For the next few weeks the Whales, Dolphins and Basking Sharks will be around Dingle Bay so all you have to do for a great day out is, you guessed it phone me 087 2213900. The next post should have more interesting photos.